I often find it interesting to find points where people (whether myself or others) want to hold on to two conflicting ideas. One such conflict is apparent in the views Americans hold toward eating meat. On the one hand, 89% have a diet that includes meat. On the other, high majorities oppose the cruelest practices of factory farming, such as breeding chickens that grow so quickly they become crippled under their own weight.

These two views don’t necessarily need to contradict. It could be that someone thinks it’s ok to eat meat but that they should always avoid eating meat raised under horrific factory farming practices (this applies to fish too).

In fact, this was something I still believe in theory and used to try to practice — buying grass-fed, organic, cage-free, and humanely raised meat and animal products. I thought that this was enough to entirely reconcile my disgust for factory farming with my desire to eat meat. But I began to realize that this was not the complete solution I had hoped for.

First, because I still labeled myself a “meat-eater,” I felt this label gave me a license to eat meat and animal products at restaurants or as ingredients in other products. This was despite having no idea where their meat came from. Given that 99% of animals are factory farmed, it’s safe to assume that the animals I was eating were very likely farmed that way.

Second, I didn’t really understand what most food labels meant. But, as this informative Vox article goes into, these labels don’t guarantee the ethical treatment of animals.

For example, these are free-range chickens… 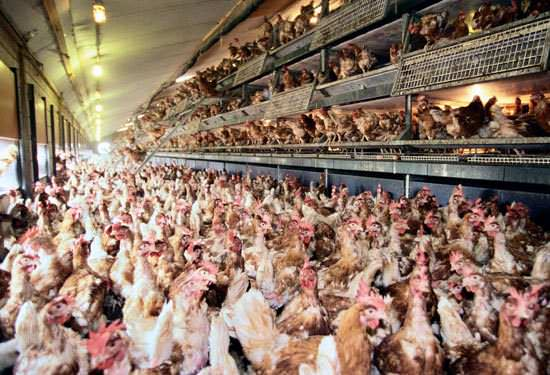 Third, many US States have introduced ad-gag laws, which make it illegal to document practices at factory farms, even if such practices would be considered animal abuse off the farm. This means that it is extremely difficult to properly document the extent of the problems on farms of all types.

Therefore, it seems rational to believe that the default option for most farms, absent public oversight or scrutiny, is to ignore animal welfare concerns in a simple desire to reduce costs. In the long run, any farm that doesn’t do that is more likely to be overtaken by a farm that does. Further, without good evidence to the contrary, one’s default assumption should be that any meat they buy comes from a farm following the default option: one that follows the same cost-cutting, cruel, factory farming practices that exist throughout the country.

This is why I am not a meat-eater.

However, I know my concern for animals isn’t exclusive to me and people I know who don’t eat meat. Many meat-eaters make a point to tell me this.

These are just anecdotes, but I’d bet almost all ethically concerned meat-eaters, end up supporting factory farms anyway because of these factors.

I don’t eat meat and try to avoid animal products in general, because I know I’ll eat factory-farmed products when I do. This isn’t to say that prioritizing eating ethically raised meat doesn’t make a difference, but with the current seemingly omnipresent reality of factory food production, eating animal products at all usually ends up perpetuating the problem of animal suffering.

However, it’s important to note that immediately becoming vegan is not the only way to help improve animals’ lives. It also should be said that excessive guilt is not healthy either. I do not eat vegan meals all the time and understand the difficulty of making animal welfare a priority.

That being said, there is a range of actions that one can take to help animals. This includes: not eating meat if you don’t know its source, cutting the worst raised animals from your diet (chickens and eggs first), going vegetarian, or donating to animal welfare charities (you can see this video for ideas).

Also, if you eat meat you could ask yourself the following questions:

Note: I am trying to grow the readership of this blog. You can help by forwarding this to friends and family or anyone you think might find it interesting.